The herdsmen’s settlement is known as one of few the settlements of such size in Europe and attracts many visitors throughout the year. It is distinct by its typical architecturewhich symbolises Velika planina. The roofs are covered with pine shingles, which extend rather low. The name of the cottage in the Kamnik part of Velika planina is “a herdsman hut” or “a shepher’s home”, and a pine shingle is called “šinkel”.

The settlement is revived every June, when herdsmen return to the settlement and tend to their cattle until September. They are delighted to invite you to taste their dairy products or try a typical herdsmen’s lunch; sour milk and buckwheat mush. 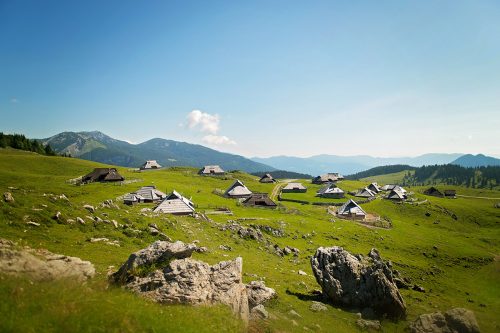 The access is possible from the top station of the cable car; continue to the top of the mountain by foot (30 min walk on a gentle slope). We recommend you to alight from the lift at its first station and continue your path on the macadam road pass the lodging house Zeleni rob. Follow the signs for the herdsmen’s settlement, which is 15 min away.

The chapel of Snow Mary, which originally stood at the same place before the Second World War, is located slightly above the herdsmen’s settlement. It was burnt down by German soldiers during the war, and was rebuilt in 1988 on the herdsmen’s initiative. It was consecrated to Snow Mary and this is why 5th of August presents a special holiday for the chapel and the entire herdsmen’s settlement. During the summer, the masses are held every Sunday and several thousands visitors attend the sacred mass or the midnight service on Christmas Eve. 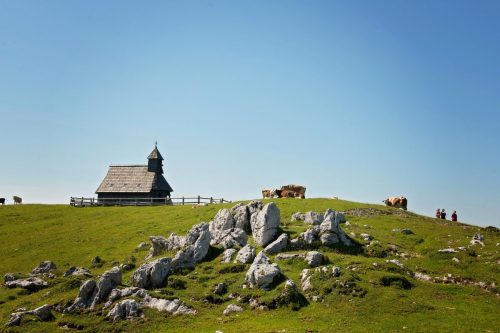 Veternica cave is the most popular natural site of interest on Velika planina. It is assembled of the caves Mala Jama and Velika Veternica, which came into existence when the roof caved in as the result of rock disintegration. The cave Velika veternica is more popular. It is known for its patches of snow, which remain in the cave also during the summer.

Dovja Griča cave is located in the valley Tiha Dolina and is 9m deep. It is known for the legends which were happening near by. The cave, therefore, sheltered many good and bad characters, which were mostly invented by herdsmen themselves. The most known are the legends about wild men who lived in Dovja Griča, also known as the wild rock, as suggested in the name itself. 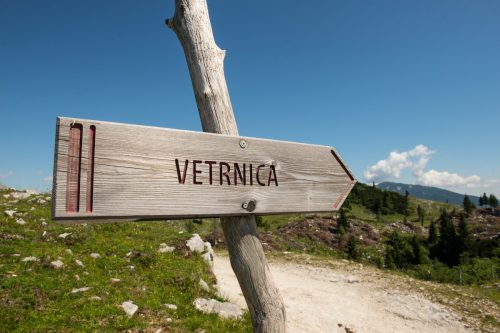 The access is possible from the top station of the cable car; continue by foot towards the top of the mountain (30 min walk on the gentle slope) or use the double seat lift. We recommend that you alight from the lift on its first stop and continue your walk on the macadam road past the lodging house Zeleni Rob in the direction of the herdsmen’s settlement. After walking for another 5 minutes, you will reach Veternica cave, which is located on the left side of the road. The entrance into the cave is possible from the green plot located further down bellow.

The purple flower is most commonly found in June, when it decorated the green pastures of Velika planina.

Although its original growing site is the nearby Krvavec, the flower is most common on Velika planina. It is recognised by its grass-like leaves and purple, egg-shaped blossom. It is the only sort of Nigritella to be enlisted on the Red list of endangered species as one of the rare plants in Slovenia. 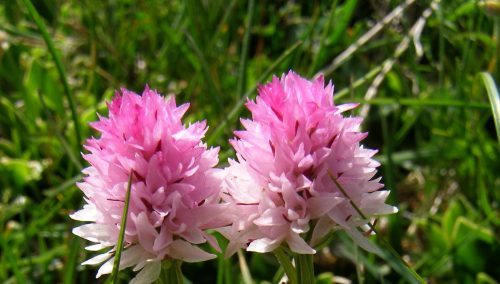 Velika planina is rich with natural alpine growth of grassy slopes and karst corners. In particular, the fairy-tale image of the mountains is given to individual larch and spruce lumpers. In order to preserve beauties of Velika planina for the next generation, we ask that you:

Tourist settlement is known as the area around the lodging house Zeleni rob. It is the area with the largest number of cottages, built for tourists and, therefore, adjusted to their needs. The idea for building such settlement first appeared in 1959, during the blossom of the so-called trade union tourism.

Several companies sponsored the built-up of the cottages, and by the end of the year 1964 there were around 60 cottages. The settlement was build according to the plans of the architect Vlasto Kopač, whose idea was to strictly separate the tourist settlement from the herdsmen’s settlement. Despite this idea, the cottages are built in the unique style and are in their appearance very similar to the herdsmen’s cottages. Kopač, who was amongst other things also the pupil of Jože Plečnik, wanted to transfer a part of folk architecture into the project of tourist settlement and has succeeded in doing so. 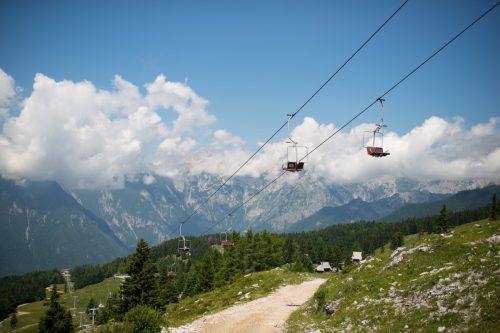 The access is possible from the top station of the cable car; continue by foot towards the top of the mountain (30 min walk on the gentle slope) or use the double seat lift. We recommend that you alight from the lift on its first station. From there, the path continues on the macadam road and passes the lodging house Zeleni rob. It turns left straight after the lodging house and descents into the tourist village. Some cottages, which also belong under the auspices of the tourist village, are located in the wider area between the top and intermediate station of the double seat lift.

After the Second World War, Andrej Preskar built his cottage with the original oval floor plan, as it was before the war. Today, this is the only cottage which is distinct from the other cottages with its shape, size and modestly decorated interior. Among other things in the cottage, there is also an example of “trnič”- a special sort of cheese known in this area. 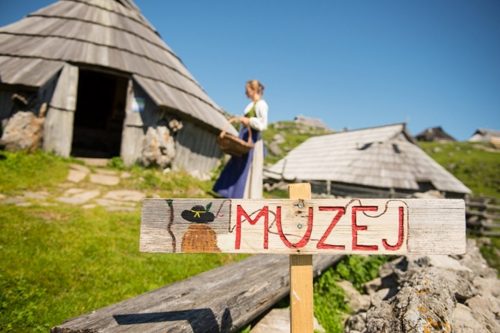 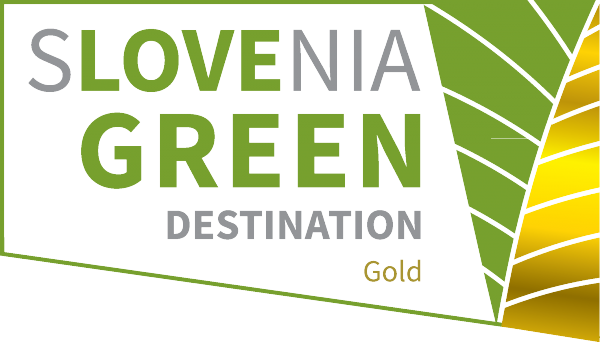